Finally found some time to continue with my Relationship Notes 🙂

PART FOUR – INVITATION TO A PARTY

And so it is in Amanda’s court to decide what to do next.  In her hand she has the little card Lee thrust under her windscreen before she sped away from him.  Not that the card has actually gone any way to enlighten her as to who he is.  She still has no idea of his name.  So…does she bite the bullet and call him?  Or does she just toss the card into the bin and try to forget about it?

If she does the latter, of course, she will still have the package…and does she really want that?  It seems to have proved a cumbersome thing to have and it’s obviously of great interest to the man who originally gave it to her.

Before she can talk herself out of it, she makes a decision and heads rapidly for the phone to dial the number.

“I thought you’d be curious about all this,” Lee says, sounding rather too confident of the fact that she would call.  He’s also managed to remember to say “hello” – a great improvement on the last two occasions when they’ve met.

Amanda, for her part, doesn’t waste any time in letting Lee know how she feels.  She may well be a bit curious about why the package is so important, but that doesn’t mean to say she is willing to plunge herself any deeper into his affairs.

However, it turns out that things may not be as clear-cut as she thinks, particularly when Lee tells her that there may be a possibility that she’s being watched.  Perhaps taking the package in the first place wasn’t the best decision she’s ever made after all.

Isn’t what he is saying a bit far-fetched?  She’s just an ordinary housewife from Arlington. Surely no one would be interested in watching her?  Mind you, there were those two men at the train station… 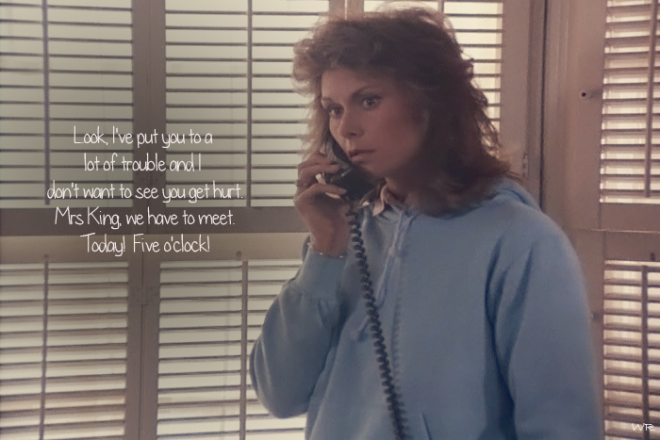 The forcefulness of Lee’s words come down the phone line and it doesn’t sound like he is going to take no for an answer!  It seems that Amanda has no real choice but to comply with his wishes.  Just what has she gotten herself into?