And so for Amanda it seems that her little escapade into the world of spies and intrigue is at an end.  Dean returns from his trip away and brings a little present home  – bookends!  Of course, he has absolutely no idea about the secret life she’s been living while he’s been away and she isn’t about to tell him either. It is only when Philip confesses that he opened the package Dotty later mailed and saw what was inside that Amanda decides that the information is perhaps far too valuable to keep to herself.  That means getting in touch with Lee – after all, she still has his card.

Having made the necessary arrangements, she goes to meet Lee once darkness has fallen upon the city.  After all, meeting in dark, secret places is what spies do isn’t it?

The first to arrive, she positions herself behind a statue to await his arrival and when she spots him she immediately seeks to attract his attention.

Lee turns, catching sight of her standing there in her belted trench coat and he cannot help but smile.  Even after the seeming finality of their last encounter and its sombre conclusion, she is back again – presumably with some vital information.  He certainly cannot fault her enthusiasm or her tenacity, however hard he tries.

“You sure know the hotspots,” he quips, glancing around at their somewhat deserted surroundings.

“Well we couldn’t exactly meet at the grocery store could we?” she fires back.  And anyway….

“Only when we wear trenchcoats,” Lee responds, unable to stop himself from having a little dig at her attire.

Amanda catches the amusement in his voice and swiftly dismisses his comment, moving on to the matter in hand, duly taking the note she has brought with her out of her pocket to read to him.

Lee, having agreed to meet her in the hope that she might have the much coveted information he needs to crack the case, listens attentively to what turns out to be a just a random list of weird names.  Amanda, in her innocence, thinks it will mean something to him but it turns out that they mean absolutely nothing.  Her disappointment is palpable and Lee, for once, is gracious enough to acknowledge that she took the time to let him know. That is until, in the next breath, he puts his foot in his mouth and effectively seeks to push her away once more. 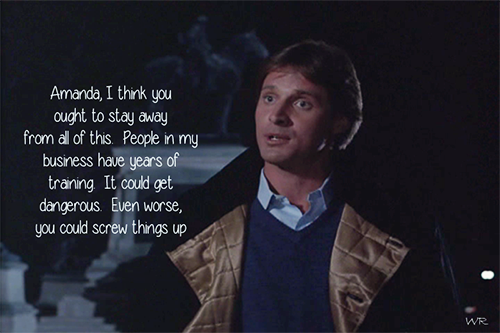 To be told that she could muck everything up is like putting a flame to dry wood.  After all, she’s had to make up an excuse at home to come and meet him!  For his part, Lee is not expecting her to react quite so vehemently and is again forced to listen to her, just as he did during their heated argument after the party.  She’s certainly not prepared to have him put her down without venting her own feelings on the matter.

He quickly puts her mind at rest regarding his job and Amanda, immediately softening, is surprised but glad – after all, that is what she hoped would happen.  Then he drops another bombshell – there’s been another murder.

Amanda can’t believe it, although it seems that Lee is going to be assigned a new case in the morning.  That must mean that the case she has been helping him with is no longer something he will be involved in – which in turn means that any slim chance that he might involve her again has been completely snuffed out.  After all, he’s not likely to seek her out to help him when he’s just made it perfectly clear that he doesn’t think she should be involved in his world.

For Amanda it’s like being left at the monument again – except that this time she doesn’t seek to ask him if their paths will ever cross again.  If it hadn’t been for Philip opening the package she wouldn’t be standing here with Lee now and although things haven’t gone quite as she hoped, she knows she has to accept that this is probably the end of her brief but eventful association with him.  She forces a smile to her lips and seeks to confirm that he will take care of himself.

He flashes her the brightest smile.  Yeah, of course he’ll look after himself. After all, he’s got his job back and, even better, he’s back to working solo again.  His unexpected and frustrating interlude with the housewife from Arlington is well and truly over….