When Lee decides he has to visit Amanda in the middle of the night, he’s obviously made the decision that it just can’t wait until morning.  In fact, what he sees is that Amanda may well be in danger if she continues her association with Alan Chamberlain. However, even after he’s climbed her trellis and they’re sitting on her bed, it doesn’t take long for Amanda to protest about being sidelined – neither of them even seeming to notice at that point the intimacy of the situation they find themselves in.

“I’m doing a good job!” Amanda tells him, although she neglects to say that Alan actually kissed her when Lee asks her if anything unusual happened during her evening.  No, it’s best to keep that particular part of her evening to herself.

Of course, Lee can’t really deny that her input has been helpful, but there’s the little matter of terrorist involvement and he doesn’t want her getting hurt. 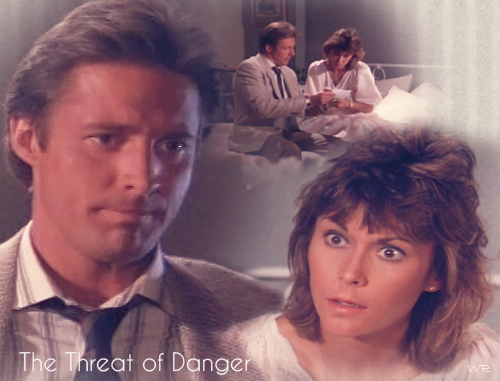 Even when she tells him that she’s due to meet Alan for breakfast the next morning and that Lee and Francine could be there, Lee is still hesitant.  It’s too dangerous for her.

It’s amazing that Amanda is able to quote the Agency manual to Lee chapter and verse to get her point across.  He can’t fail to be impressed by not only that but by her sheer tenacity to continue and does reluctantly agree when he realises that he has no other real choice.

Her reassurance that she’ll get in the car and drive away if need be seems to reassure him a little and reluctantly he agrees to her plan to meet Alan in the morning.

“Deal!” I don’t think he even thinks twice about reaching out to shake her hand to seal their agreement, but that’s when everything changes and their close proximity to the other there on the bed suddenly hits them full force.  It’s late, the rest of the house is sleeping, Amanda’s there in her nightgown, they’re alone….

In that moment the mood between them shifts and becomes suddenly more charged. Their hands lock in what starts out as an innocent handshake and then, very quickly, alters into something far more as they stare at the other, their joined hands and the sheer intimacy of their surroundings crashing through them both at the same time. There’s no denying the attraction that’s bubbling between them. Lee tears his eyes from Amanda’s, staring down at their linked hands as Amanda impulsively reaches up to quickly cover herself with her free hand, no doubt feeling in those moments very exposed to him. 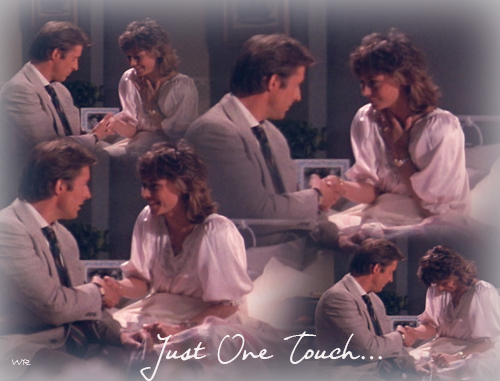 She watches as Lee slowly, almost reluctantly, removes his hand from hers, although not without trailing his fingers lightly and deliberately over her palm very very slowly as if to extend the moment and no doubt sending little currents of sensation through her at the same time!

“Well, I guess that’s it then til…til breakfast,” he tells her falteringly, finding his voice, although there’s no doubt they’ve both been left a little off-balance by what’s just transpired between them.  He turns and looks towards the bedroom window – anywhere but at Amanda it seems – although when he does look back at her he’s managed to recover himself a little.

He’s got to get his mind back on the case, not on how appealing Amanda looks sitting there in front of him!

“Be careful going down the trellis,” Amanda tells him, which brings his mind right back to the present and the fact that he has to leave her.  To linger any longer might not be the wisest of moves and it’s not as if they have anything else to discuss about the case now.

“I’d better go.” The instant Lee makes to get up off the bed, Amanda pushes him back down, making sure that the light is off and issuing instructions to him to tiptoe to the window before she allows him to get up.

As they creep over to the window and Amanda steps back to let him out onto the trellis, Lee once more tells her to be careful before wishing her goodnight.  As Amanda watches after him she can’t help but wonder….

2 thoughts on “Favourite Moment of Awareness – A Lovely Little Affair”