PART ONE – A FATEFUL ENCOUNTER

3rd October 1983.  Two people, completely unknown to each other, are busy living their lives.  Lee Stetson – code-named Scarecrow (he looks nothing like one!!) – is a suave, charming and successful spy who lives a life filled with danger, excitement and more than enough women to fill his evenings while Amanda King, on the other hand, is a newly divorced housewife with a live-in mother, two children and a boyfriend who wants to marry her.

Lee and Amanda couldn’t be more different and it appears unlikely that they would ever have cause to meet, but that’s all about to change because fate has its own plans for this unlikely pair – well, fate and Amanda’s boyfriend, Dean, who unwittingly plays his part by getting Amanda to drop him at the train station on this particular October morning solely because he doesn’t want to leave his car out in the rain (and being a weatherman he has predicted that there is a chance of rain).

Having fended off both her mother earlier in the morning remarking about how good it will be when she gets married and Dean telling her, even though he knows she is looking for a job, that he only hires people who marry him (!!), Amanda blithely waves Dean on his way at the station.

Lee, also in the near vicinity, is in a bit of predicament. The night before he took possession of a very important package which ultimately got his co-agent killed and now he has two rather unsavoury characters on his tail, determined to get hold of him and the package.  He has now wound up at the station with a view to handing over the package to another agent, but things are getting desperate.

When he endeavours to push his way onto a train he finds that his fellow passengers are not too keen on him doing so and they block his way, preventing him from boarding. That, of course, leaves him in a real dilemma.  If he can’t get on the train, what can he do? After all, his mission depends on keeping the package safe.

As he stands there, frantically debating his next move, his attention is drawn towards the people walking along the platform towards him, one of them a pretty young woman.

Acting purely on the impulse of the moment, he moves towards her, grabs her and spins her about to walk back in the direction she’s just come. 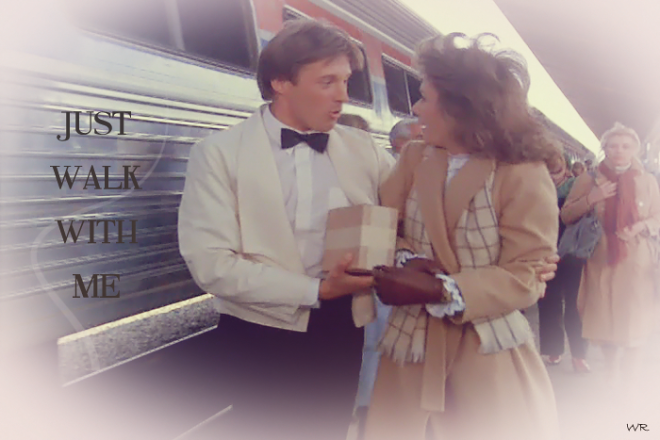 As introductions go, it is pretty original (note that he doesn’t even bother to say hello first – something which will soon show itself to be a bit of a trait with him in the future lol), but it’s also not quite what Amanda is expecting.

She’s definitely not happy about finding herself being manhandled by a strange man (even if he is rather attractive) when she was merely minding her own business.  She tries to bolt, deciding that she really doesn’t want anything to do with him. 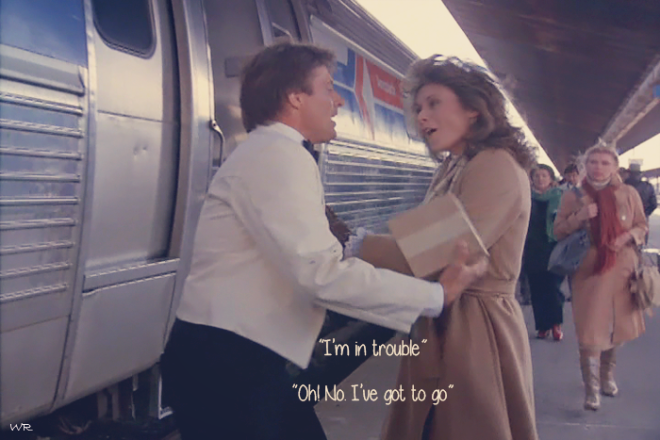 For Lee, maybe it is pure instinct that makes him go after her again and stop her in her tracks, knowing that maybe she is his last hope of off-loading the package before the bad guys catch up with him.

He has no choice but to try and persuade her to hear what he has to say, to plead with her if he has to. His gaze fixes desperately on her as though he is seeking to connect with her on a deeper level. He has to make her stay long enough to listen.

Amanda is really not sure what to think.  What was it about her that made him think that she might be able to do something for him? Why did he choose to pick her out of the numbers of people walking by?  She notices them pass, no doubt wishing she was one of them rather than staring into the eyes of this man who seems so anxious for her to help him.  His desperation is certainly compelling and palpable.

Her desire to run starts to waiver.  He’s certainly persuasive.  His entire focus is on her, his eyes transfixed to hers as he begs her.  In this moment they both unwittingly stand on the cusp of change, although neither of them, of course, realises what this will mean for their futures.

“All right,” she says, resigning herself to doing the decent thing and offering to help him.  “What is it that you want me to do?”

An expression akin to relief crosses Lee’s face with her disclosure, his lips curving into an all but brief smile.

There in that all too transient moment we catch a glimpse of the softness which lurks beneath his agent’s mask, even though it is very quickly eclipsed.

And so the dye of change is cast.  Here is where their lives collide and connect. Not that either of them have the time or the inclination to consider what this means as Lee hands Amanda the package and issues her with instructions concerning what to do with it.

“Just take this.  Get on the train.  It’s a matter of life and death,” he tells her. Having got her to agree to do this one thing for him, he is now back in full-on agent mode.  He has no inclination to make small-talk – after all, he knows that time is of the essence even if Amanda is completely unaware of it – and doesn’t allow the possibility to even rear it’s head.

While they are walking he has his arm draped across her back, keeping her close to him.  It’s almost as though she is both his metaphorical and physical lifeline. In fact, he’s barely let go of her since accosting her.

For Amanda the instructions Lee issues her with are clear and uncompromising. It also seems far-fetched and she can’t help but question it.  “Is this for real?”

Lee won’t be side-tracked, however.  He’s got to get through to her just how important her getting on the train and meeting his contact is.

He is aware of the bad guys getting closer and as they reach a door leading onto the train he leaves Amanda standing there staring in dismay after him, even as he waves emphatically at her to just board the train.  After all, he doesn’t want the bad guys knowing that he’s given the package to her and for them to go after her instead.

Amanda, now on board a train she had no intention of getting in the first place, is curious enough to peer out of the train window as it’s pulling away, searching the platform to see if she can spot Lee at all.  What she sees, however, is him being pursued and then caught up with by two rather burly men who then proceed to attack him!  His words now about it all being a matter of life and death appear not to be so far off the mark after all.

She cannot do anything to help Lee out of the situation he is in on the platform, but she knows that she can do what he has asked of her, namely to give the package to the man on the train.

There’s just one tiny little problem….there is more than one man in a red hat on the train!

So now what’s she supposed to do?